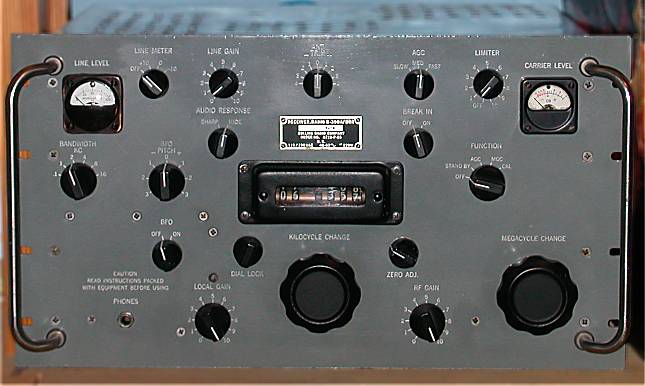 R-390/URR was extremely good – and extremely expensive to make. Collins was assigned to design a new and cheaper receiver which resulted the R-390A/URR. For example, the 2 RF stages of the R-390 were replaced by one and only 4 IF stages were left from 6. Excellent selectivity was achieved by mechanical filters (which were already used in R-388A / 51J4). With these and other changes the expenses were lowered by more than 200 dollars – not a small amount in that time. Several other variations of the basic R-390 were made. R-389/URR is a LF version which covers 15 – 1500 kHz. R-391/URR has 8 preset channels in addition to the normal tuning mechanism. These two were made only in small numbers and to-day they are very rare. R-392/URR was meant for mobile use. It measures about half of an R-390, still with most of the innards of its big brother.

The new R-390A became a steady favorite which was produced for military use until the end of 1960’s. More than 60 000 of it was made in 1954-1968. Collins was no more a major producer, as the contracts were awarded to many manufacturers, including the well known EAC/Hammarlund and Motorola.

For a long time the R390A documents were classified and the manual included clear instructions of how to destroy the set if it seemed to fall in the enemy hands. Nearly all R-390A’s were in military use, but also the CIA and NSA used them to monitor the radio traffic. It was only until 1968 when the receiver was offered to the public for a price of around 1700 dollars (some 6700 dollars in today’s money). On the other hand, even this was cheap, as the first R-390 receivers are said to cost the US government some 2200 dollars, or approximately 13 000 dollars in to-day’s currency.

R-390A has not been manufactured in quantities after 1960’s (the last 5 were ordered by the US Navy half by mistake in 1986) and since then other receivers have replaced it as an all round USAF receiver. Short Wave listeners, radio amateurs and other interested could now enjoy the surplus R-390A’s. A few of them found their way even to Finland, where normally the surplus Racals used to satisfy the needs of those wishing a good quality receiver for an affordable price.

R-390A’s are becoming more and more scarce, and therefore their price is going up. For instance, the list price of a functioning R-390A with panel meters at Fair Radio was 575 dollars when it still was available (2004), to which the European customers had to add about half for the air freight, customs and vat. Also, a license from the State Department is needed for export, and that will take some weeks.

R-390A has sometimes been referred as the best receiver of its time, but there may be other very worthy claimants to this title. On the other hand, while there certainly are better receivers, they may strain your budget very heavily. If you think of to-day’s price of a R-390A, an alternative  could be to obtain a small, handy microprocessor wonder. But then you really have to think, what are you more interested in: nice looks, light weight and scanning around 2 GHz — or quality, reliability and endurance. R-390A is a good example of the finest engineering principles and use of materials of its time. For instance, much of the coil forms and wire insulation are of Teflon and the coils are impregnated with Araldit – in the 50’s! I believe that a well planned and well made product preserves its usefulness much longer than those that are made to the specifications of the marketing department.

Nowadays R-390A is rather popular on the western side of the Atlantic, where there are thousands of enthusiasts among the amateurs, notably many with military background. The sets have been quite easily available, as well as spare parts and good advice. Reconditioning a scrapped R-390A is quite popular. On the other hand, interest to use them as a DX receivers is not so common nowadays.

The characteristics of the R-390A are just those what a DXer needs. It has rather an accurate dial, good noise limiter, 6 degrees of selectivity, excellent strong signal handling capacity and enough of sensitivity. SSB might be better, though it is possible to feed the 455 kHz output to another receiver with suitable product detector. While the IF selectivity is not always the best possible, the excellent front end compensates for that.

At birth, R-390A was revolutionary in many ways. It has an odometer type dial turned by a system of wheels: no breaking strings or film dial. The frequency knob and the dial are linear so that one turn of the knob corresponds to 100 kHz. On the other hand, the PTO of an old receiver is seldom accurately linear and also the band crystals may be several kHz off their nominal frequencies. The kHz knob moves the core of the PTO and also keeps the appropriate RF and IF coils tuned to the frequency by means of a very complicated system of wheels and cams. Actually, the tuning mechanism is much more complicated than in most mechanical clocks.

The receivers chassis is a big H made from approx. 5 mm aluminum plate, to which the front and back panels are attached. The various modules are connected to this Main Frame (remember the computers of the 70’s!). The construction is stiff and heavy (more than 30 kg). The use of modules improve inter-stage isolation and facilitate service: malfunctioning module can easily be renewed. On the other hand, because of this, many to-day’s R-390A’s may contain modules from various manufacturers. For example, my own set’s front panel has a Collins tag from 1955, but the PTO is a Cosmos rebuilt in the 70’s, and IF and RF modules are Steward-Warner from 1960.

I have owned this receiver a few years, since 1999. When I got it, it was looking nice (from Fair) but not as sensitive as I would have wished, especially on the band 2 – 4 MHz. After setting the PTO end point it became better but not perfect. I now have a set of new tubes and capacitors but not yet in the radio. But perhaps I’ll get to that project,  right after walking the dog, painting the windows, re-painting the house, making the garden shed and garage door … ´;=}